Sonic OC/FC Wiki
Register
Don't have an account?
Sign In
Advertisement
in: Articles Under Construction, Females, Female,
and 18 more

WARNING FROM AUTHOR/OWNER: SOME SECTIONS ARE NOT PROPERLY IMPORTED FROM THE ORIGINAL LOCATION OF THE WIKI. THUS, SOME IMAGES ARE NOT AVAILABLE AT THE MOMENT AND SOME REFS AS WELL. THAT WILL GET FIXED AT A LATER TIME WHEN THERE IS MORE TIME. FOR THE ORIGINAL PAGE WIKI, GO HERE !

The author of Artistia The Hedgehog, ARTISTIAChan, considers this page to be unfinished. As such, some sections may change. Some sections have also been tried to replicate the official page from Sonic Fanon Wiki to the best of abilities.

(Depends on Universe, RP, or situations)

Artistia the Hedgehog(アーティスト・ザ・ヘッジホッグ Artisto za Hejjihoggu, born 19-21 November[1]) is a pink and red anthropomorphic hedgehog, created by ArtistiaCons (AKA Brianna Nevaeh Gonzales). She is a fan character/original character and a neutral good protagonist character as well.

Artistia is mostly known as a hero however, saving those in need or doing what she feels is right to all. Her previous intentions were to do things that were best for herself, but that changed over time as she gained friends, changing her locked-up behavior. Any other occupations she has is being an artist and small writer.

She was originally made as a Sonic OC but turned into an original project for multiple Sonic alternate universes, including ones made by the creator[2].

Artistia is the usual average optimist, varying from different hobbies and talents. However, Artistia can also change moods rather quickly as the eye can see, though she always is deemed to be happy and usually is the one who makes jokes and does what she believes is best for everyone.

Looks: She appears as a average shaded pink hedgehog who has red dyed quills in the front and has tan skin, but seemingly lighter than Shadow's. She has four quills on the back, two in the center on top and bottom, whilst the others are on the sides, making a diamond shape. She also has two side quills on the sides of her muzzle(one on each side), which dye similarly to her front ones.

Attire: She wears a dark and long red vest, light black casino shorts, a white bowtie, along with butyl long white gloves and boots similar to Amy's but with black buckles to strap around them, and as well as more heightened heels.

Artistia was first originally a very anxious, shy, and timid teenager who had become one to isolate herself from others. Though once she had discovered her abilities and sudden confidence, she had become a much more better person, especially after her rescue from Dr. Eggman, the only person she knew since her birth. As stated, she is normally always happy, being a different counterpart to the creator of her(which she is very serious, thoughtful, and rather timid). Other than that, she is fun to hang around, and as well make jokes about the common life. Other than being happy all the time, it can be quick to make her serious, which deems the quality of her changing mood rather quickly.

As some users are known to have telekinetic abilities in the Sonic universe, she is granted naturally to have telekinesis. It is uncertain how far and how many abilities she may have inside of that, but psychokinesis is one of her main attributes and strengths to have. Though she did not inherit these abilities, but was rather born with them.

For a simple summary of how strong or powerful her abilities and powers are, it is basically a balanced mix of Sonic, Shadow, and Silver's powers. However as mentioned that they are balanced, most of her powers are solely based off of Silver's.

Artistia, who formerly went by Afire and Afflict, was born in the depths of the Mystic Jungle Zone, which whom she lived with her parents in a village, which not many were seen to be living there. She grew up to the age of about 5 years old, growing up alongside the ancient ruins of history and her people's kind. However, there was a decently-sized village she grew up in and she was raised by her parents, which were still unnamed to this day.

She was the daughter of the chief of her people, and as well as the heir to lead her village. Her village people were united with ancient Echidna civilization as well for the association for both of their protection of living.

Shortly after her birthday for the annual celebration, an attack was made throughout her home, and it was due to a fire.

Not finding her parents, she was "rescued" by a certain Doctor. That's when she would never see her people again, seemingly to leave her village in much of ruin and ash.

Years later, she was raised by the notorious Dr. Eggman, having no will or leave the base he had her grow up in. She currently was 12 at this time.

He taught her the ways of going against those who oppose you, including those who you love. Despite this type of wording, it was come back as karma in the future of him.

When he taught Afire the skill he had, she easily learned from his teachings. Thus, the day he felt as if she became the best, that's when he named her Afflict, finally making her name official. However under his watch, she would never reach his level of intelligence nor skill of constructing robots or anything else.

Few more years later, she would be by the age of 14. That's when she finally got to meet the infamous hedgehog of black and red; Shadow the Hedgehog. He would discover her being contained by the Doctor, quite giving him a scold for it.

However, Shadow did not seem to rescue her from his grasp, but rather instead finish his business of retrieving an emerald from the said Doctor. Despite it all though, he never got it, since it was in the hands of a certain female, not wanting to take her source of attachment away.

During the time of Shadow's visit, Afflict was beginning her transformation to what she appears now through an accidental experiment machine created by Dr. Eggman. However, for what it was created for, he stated his project was complete. What Shadow nor Afflict knew was that he was using her hedgehog DNA to use it to his advantage to capture the famous Blue Blur.

As soon as she reached the age of 18, that's when she decided to go explore the world on her own, quite intrigued to move out as well. However Dr. Eggman prevented that, forcing the female to remain in containment for another few months. As that time went by, she would be rescued once more by the heroes of Möbius.

Shadow was scolded at by the others due to this, as they never knew he was aware of her existence for being captive by the Doctor. They also found her important, as she was taught the things as by Dr. Eggman, which they took advantage of by freeing her.

The original idea was to remove an ally from him to stop his robot production to thus make it slower. Though over time, they realized how much of a kind person she was after getting to know her.

A few weeks later, she would find out about a former bandit making havoc in a public park. She checked it out, as now being known as 'Artistia' upon hearing it from her transmitter. She would find a maya blue wolf.

Then on, strange enough, the two became friends, now having him be an ally of the heroes. He referred to himself as Thomas.

Artistia's name varies in this AU:

-Afire Hedgehog(given by parents before death)

DO NOT USE HER TO RP, WRITE WITH, OR CLAIM! ASK @ARTISTIAChan PERMISSION FIRST TO USE THIS CHARACTER IN ANY WAY, SHAPE, OR FORM!!! 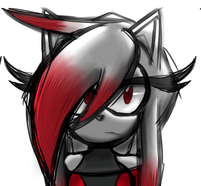 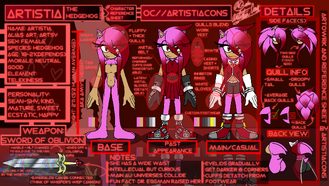