RogueEmpire64, the author of Endolæt, considers this page to be unfinished. As such, some sections may change.

Back in the year 1400, Endolæt was nothing but dry clay, nor was it called Endolæt; It was just an empty land, devoid of life. It was truly a bleak sight. A lone man of Unknown descent, (whose name has been forgotten over time), found the empty land and built his home from the clay. many years later, some outsiders saw his now vacant house and decided to build their houses there, using the clay from the ground. time went on, and many more people lived there in clay houses. in recent times, other types of houses have been built all over Endolæt, using wood, misc. magiks, sandstone, rocks and crystals. A darker, poorer and forbidden part of Endolæt had developed in the 1960's, and it lies in the deep underbelly of the land, where most are banned from visiting.

Back in 1982, many Mischakers were forcefully taken from their homes and brought to a lab, the men who took them wanted to create "the perfect beasts", they wanted to make them the strongest creatures in the whole world. what they injected in the bloodstream of the Mischakers was so painful it caused them to transform into their "Corrupt" forms (a form created by the experiment). in this new form, they would be horrifyingly violent and attack anyone and anything, causing major damage in huge areas. some Mischakers, Razzy included, were even forbidden to return to Endolæt on the count of the mass destruction they caused. Razzy however, had the most injections, so his power was the strongest and most dangerous of all of them. he was banned from returning for many years. so many lives were changed and so many Mischakers were shunned from "becoming a menace to society". The lab was shut down in 2006.

It is traditional for Mischakers of all ages to participate in practical jokes and mischief; They enjoy scaring others, including their own kin. Mischaker legend states that it all started one cold night and the location was an army base and a particularly naughty Mischaker boy snuck in the hideout and literally scared the guards out of their skin. The boy continued his wicked antics until 5 years later, he had ventured down a foggy path, never to be seen again. Another important point in Mischaker culture is the crafting, Mischakers love to create many things by using any material they can find. They make music and dance as well; "The Moon Dance" is a significant part of the annual Crescent festival, which is a celebration of when the King of the moon saved Endolæt from near extinction after a battle against Jinkoss(Hiro's father, whom passed away from his injuries dealt by the King's sword), bringing peace to the Mischaker people. It is disrespectful to not participate in the dance, or shame someone who is trying to do the dance but is struggling to perform it right. Anyone who is having problems with the dance must be assisted by another experienced person rather than be heckled and belittled. There are many different berries that taste very similar to foods that are common, like chicken or chocolate syrup, except it's just a berry. The roots that grow in the east are combined with the berries in the north to create unique dishes, some roots are hard to grow and harvest, so they are used only on the Crescent festival. A favorite is the Tubban, which is a sweet root that is torn by the tip by teeth, then the thick milky liquid is drank. It is rich in vitamins essential for the Mischakers health, and very delicious, tasting exactly like a sweet dairy drink. One thing all Mischakers of each descent can agree on is the one thing they look forward to each year is the KaviTay Festival to welcome the new year. The best food is brought and best of all, they get to enjoy a performance by a local band: "Ke ralevi unne ztukk", which translates to "A Touch Of Sound". They perform relaxing but emotional pieces, and the music is enjoyed by all who hear it. As it is known worldwide Mischakers are pesky and sneaky, they can be caring and sentimental creatures; It can be hard to tell since they are usually troublesome with their pranks and habit of scaring others.

PuR Form: The PuR form isn't for battling, as the magik used while PuR are too weak to use. However, this form is much more useful for healing and assisting allies in a pinch. The ribbons summoned by a PuR ally will restore stamina and cure a few ailments.

Imp form: This form is very, very weak. Although, all who take this form are horrifyingly fast. This can be useful for confusing an opponent; As the imp looking and feeling quite similar a plush toy, staying perfectly still can trick any nearby threats as they will be unaware that the supposed toy is actually alive.

QuaRz form: This is a very rare form, and is only seen in dire situations. Entities who have taken the QuaRz form look translucent while their eyes take on a shiny gem look. This is a stronger form than any other form and can be deadly to an opponent who is unprepared. The magiks used in this form are so powerful, QuaRz users have been banned from several states in the Endolæt region.

The symbol of peace for the Mischaker people. It means "We all look at the same moon", meaning we are all the same people, we must love and respect one another.

Rough drawing of a village in Northern Endolæt. 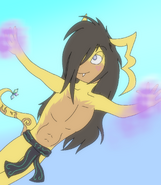 A Mischaker taking the PuR form, sprinkling a healing mist from the sky. 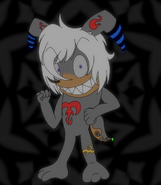 A Mischaker in his Imp form. 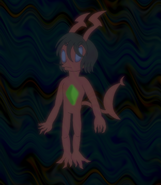 A Mischaker in the rare QuaRz form.
Community content is available under CC-BY-SA unless otherwise noted.
Advertisement