Kai is a OC created by Dragonite115. He was created due to the lack of OCs he had that were gay.

Kai has black gloves, pants, and shoes. His shirt is purple, and he wears headphones. He has blue eyes and pink inside his ears.

Kai is openly gay, and is usually smiling. He is very polite and kind around adults. He gets good grades in school, and pays attention in class. He obeys laws and rules and dislikes arguments. He will walk away from a fight, but if one of his friends is in the fight, he will try to get them out of there before the fight becomes worse. He likes to text and hang out with his friends on the weekends. He also likes to cook, bake, and play video games.  When it comes to his boyfriend, he is sweet and kind. Kai will put his boyfriend first and make sure he is happy. He always calms Samantha the Cat when she gets angry.

His friends include Marc The Fox, Chase The Hedgehog, Dan The Hedgehog, and Jhoseph The Leopard. Together, they hang out at each other's houses and go to the mall.

Kai is currenty in a relationship with Chase the Hedgehog. They met one at school and hung out. After Kai revealed his sexuallity to him, Chase revealed that he was bisexual. At first Kai kept his love form him a secret, but after over a month, he revealed his love for Chase. Along with that, Kai kissed him for the first time. When Chase accepted to be his boyfriend, Kai was so happy. Kai usually does whatever his boyfriend wants to do, and sleeps over at his house on the weekends. They have been going out for about a year as of March 19, 2013. 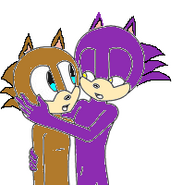 Kai Making Out With His Boyfriend