Kate is a Sonic OC created by Dragonite115. She is the first female OC he has created. She is currently married and has one son.

She wears a black shirt with white gloves, and grey pants and shoes. Her eyes are grey and she has pink inside her ears. She wears a spike bracelet on her left arm.

She is kind and generous. She will help people in times of need. She is very polite, and she obeys rules and laws, however, she can get a little wild at times. She likes gardening, shopping, and cooking. Before she met Cole, she would dream about her future.

When she was 16 she had her first boyfriend. They met in school, and they would hang out whenever they could. On the weekend, she would go over to his house and just relax. He would get gifts for her that she would enjoy. After one year into their relationship, he wanted to go further in thier relationship by mating. Kate wasn't ready, but he tried to convince her. Eventually, she broke up with him because she didn't want a guy who was going looking too far into the future. After Cole moved to the city where she lives, she saw him one day in the diner. That is when Kate saw him and sat down with him. At first Cole didn't want to talk, but eventually he told her what happened. Eventually they got to get to know each other better and had lunch together. Eventually their friendship grew into love. Cole dated her and felt really happy being with her. Eventually they mated and got his girlfriend pregnant. Cole was happy he was going to have a family and asked Kate for her hand in marriage. She said yes, and eventally they got married at the church. Two months later,Kate's water broke and she was rushed to the hospital. A few hours later, their son, Jake was born. 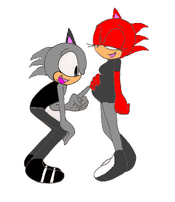 Kate's husband finds out she is pregnant

Kate and her husband, Cole, kissing