View source
May The Hedgehog 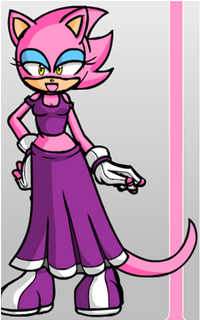 May Was Emmygirl121's first Oc

She is Caring and Generous

May had both parents and was very loved as a kid. When She was five, her mother gave birth to her sister Rose. When Rose was very little her mother passed away. Her father had no Idea how to be a mother to his two daughters, so May started taking care of Rose, like she was her own child. May didn't mind taking care of her younger Sister, because it is what her mother would have wanted her to do. Whenever there was something her Dad didn't know how to do, she would learn how to do it. May Learned how to cook, bake, and Sew. May started working at the mall to be able to get her own house. When May Graduated High School, She knew she wasn't going to go to College, and that she loved her job at the mall.

May dated multiple Men When she was in High school. None of those relationships worked out for her. When she was a junior in high school, she took a break from Relationships. After she graduated high School she met Jason. Jason and her dated, and she felt like he was the one. They got married and had a Son named Mason. May Felt like Jason was a jerk, and was only acting nice to stay married to her, so they divorced. May wanted to take another break from dating and focus on raising her son. May went on a date with Nick and they started Dating,