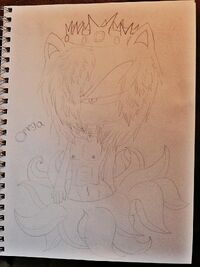 Guards who disobey him

Omega acts any other king. He is damanding and hates losing. If his solders don't obey him, Omega will punish them. He is not afraid to go into battle, but he prefers sending his solders into battle. If his family is in danger, he will do anything to protect them. He wants to take over other world in order to be more powerful and have a power army.

Omega has 20 tentacles which he can use to hold his opponents still. Like Darks, he can teleport  to any location he wants.  He can shoot dark beams out of his hands. He can turn anyone into a Shadow by biting them or injecting them with DNA from a Shadow.

He has many rivals, including the Darks, and the Mobians. He has come up with plans to take down the Nega World, but they have failed. He is jealous of Abyss, because he has a family, and he believes his kingdom is better than Abyss'. His rivalry with the Mobians comes from the fact that he thinks Mobians are weak because most of them don't have powers. He wants to take over Mobius and make Mobians work for him, so he can make more powerful. He also hates the way Mobius is, and wants to make it more industrial. He will do anything to over power his rivals.

When Omega was born his dad Sigma, was king. As a baby, he would eat a lot, and play with his parents.  When he turned 11, his dad had to go to out to solve a conflict. Months passed, but his father never returned. Omega would look at his picture every day, hoping he would return. After a year has passed since Sigma left, he was presumed dead. Omega was heartbroken and upset. Being the next (and only male) in his family, he gained the power as king when he was 12. He vowed to use his power to avenge his dad. When he was 16, he learned about Darks and Mobians. After that, he blamed his father's death on the two races. He seeked revenge on the two; His mother didn't approve, but he didn't listen. He begain training his solders for battle, not stopping until he got revenge. When he was 25, he got married to Jade. He had a son named Sage when he was 30. He taught his son everything he knows and learned, so they would be ready to rule the Shadow World when it is time.