The author of Timothy Brenton considers this page to be unfinished. As such, some sections may change.

A clone of evil?

Timothy had been cloned by Prof. Akot many years ago, and saw Dark as filth that needed to be destroyed as he was the "evil" clone of himself.

No longer our hero

At one time, Timothy was a hero of Mobius that many Mobians looked up to, along with wooing a woman named Blare. He kept Mobius safe for a long time, the bad guys kept away, and all seemed well. Unfortunately, the good times had come to a screeching halt. In 2014, a new threat raised it's ugly head, and it was much, much worse than the baddies of the past. He was Hiro, and he wanted Mobius to follow his orders or else. Timothy(being raised to think anyone who wasn't a Mobian or a Solar was evil), saw this as a threat and tried his best not to let any outsiders come to Mobius. He took The Paragon's Sword and had slain many Darks and a few Mischakers who came to Mobius to escape the wars going on at the time in their worlds. Some Mobians began to take notice of this(Darks were seen as allies, nobody knew anything of Mischakers yet), and pressed Timothy about this and asked him why he was killing innocent people. Timothy would bluntly answer by stating that the outsiders caused the destruction that was going on and were possibly helping Hiro with the crimes. Soon after, the majority of Mobius no longer saw Timothy as the hero they once saw him as. They lost all respect after what he had done to the innocent Darks.

All hope is lost

Once more Mischakers started showing up in Mobius, Timothy was disgusted that they had the nerve to make Mobius their home and decided to form an alliance to "cleanse Mobius of the nasty filth that was the outsiders". Sadly, he did find quite a few people with this same mindset and he successfully formed his murder clan.

Burning phoenix wrath. An extremely strong fire attack he uses with his phoenix. he transforms into his hyper form to make the most damage. a burst of blue fire shoots out of his mouth, eyes and palms. the phoenix shoots a ray of blue fire from its beak at the same time.

Volcano showers. A burst of fire and ash shoots from his palms.

Water. Being a fire type, Timothy is very weak to water type powers such as Soul Wave.

Trick. Magic used from cards or other Magician powers are moderately effective against him.

Mystic. Timothy is weak to Mystical powers such as "Stars revenge". 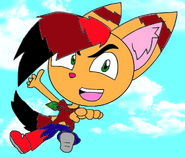